How to become an International Cricket Captain, Miles Buesst (class of '89)

2. Move to Lima in 2006, just as Cricket Peru is applying for Affiliate Membership of the International Cricket Council (ICC).

3. Be one of a handful of expats with a cricket background in a football-mad country with only one cricket pitch (despite being five & a half times the size of the UK); where the nearest away game is some 1,500 miles away in Santiago, Chile; and the nearest shop selling cricket equipment is in the USA.

5. Take over from the incumbent captain - an Aussie - in 2009, when it is clear he needs a hip replacement.

In total, over 11 years, I played 35 times for the Peru Men’s Team, captaining on 15 occasions … before handing the baton on to a younger, fitter and altogether better (also Aussie) candidate in 2014.

My win/loss ratio would certainly have got me the sack at a Premiership football side, but luckily Cricket Peru puts a strong emphasis on the social side of the sport, rather than being results-driven!

With a limited cricketing infrastructure in South America, grounds were always in short supply. So, any open space - ideally with some grass - could become an pop-up cricketing venue:

● An old US Air Force base in Panama City was the scene for a tournament that included an MCC team (who lost to Panama in the final).

● Polo fields: these have been used for tournaments in Lima; San Jose, Costa Rica; and Rio de Janeiro.

● A car park in an industrial estate - using part of a car radiator as a wicket - saw a hotly-contested tapeball game between Lima and Tacna.

Cricket Peru currently has quite a dynamic outreach programme, that is taking cricket to some of the disadvantaged areas of Lima. There is always a need for cricket-playing personnel (male and female) to assist with coaching.

So, if you are interested in getting involved in this, playing cricket in Lima’s T20 league (which is very sociable) and/or getting to know Latin American life, feel free to get in touch via the website www.perunorth.com.

And as you can see from the above, there would be a good chance of playing for - or even captaining - Peru in an international cricket match! 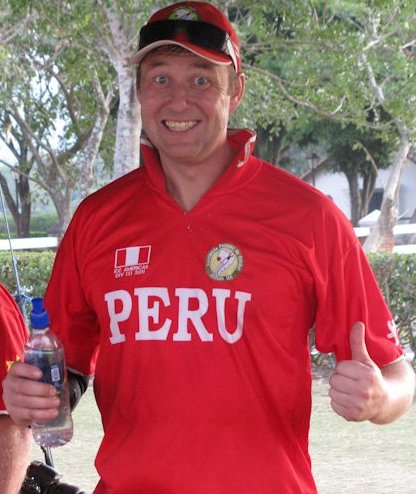